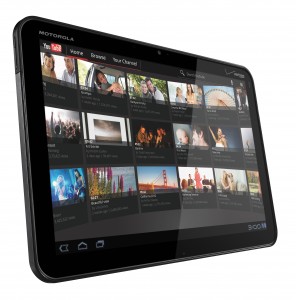 The week before the launch of the iPad, a special delivery arrived at my office from Verizon Wireless: a Motorola Xoom™ to be put through its paces. I knew that there were still a number of “upgrades” that would be arriving in time, most notably Flash support and the 4G/LTE hardware upgrade. Still, I’m a Google Apps for Business customer with a heavy reliance on Gmail and the browser, something where Android naturally excels.

The first thing I noticed was the phenomenal build quality and solid feel. The Xoom™ doesn’t convey a feeling of lightness, but it isn’t a heavy device at 1.6 pounds. Holding the Xoom™ just feels right, at least for my hands. There is a nice soft-touch grippy surface to prevent it from feeling slippery. The Xoom™ sports a dual-core nVidia Tegra 2 chipset with 32GB of storage, 1GB of onboard RAM, a 10.1″ 1280 by 800 LED display and cameras in front and rear. In terms of hardware specifications, the Xoom™ beats the iPad on paper.

Next was to find the power switch. The front of the Xoom™ is completely flat glass, no buttons to speak of at all. So I scoured the sides, found the volume buttons, the connection ports, but no power button. I turned it over, to see the rear facing camera, but nothing was obvious. Pausing for a moment, and convinced that I was not going to need to open the manual, I held the Xoom™ in both hands and just stared at it, thinking, “What would the most natural place for a power button be on this device?” 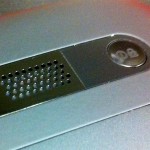 And then my index finger found the power button, perfectly placed right where your index finger would land if you had just picked up the device. So after a short push, then a long push (the actual way), the Xoom™ sprang to life. From a usability standpoint, this is one of those quirky little things where the first time you need the power button, you have a hurdle, but in every subsequent use (2 to infinity), the button placement works very well. Maybe the solution is a “Where’s Waldo” sticker that let’s you know where to look.

Activating the Xoom™ was trivial: no need to plug into a computer. I simply typed in my Google account credentials, and I was up and running almost instantly. In contrast, the iPad still requires activation through iTunes and you cannot add an iPad to an existing Verizon Wireless account. Verizon treats the Xoom™ like any other device, so you can add it to an existing account for streamlined billing.

First stop was the native Gmail application on the Xoom™. Honeycomb’s Gmail application is the highlight of the device. All of the Gmail features are there and the application is rock solid. I’ve been frustrated using Gmail on iOS (iPhone & iPad) as you have to choose whether the default action is to archive or delete. When I process email, I want to archive some messages, but delete others. Processing email on the Xoom™ while sipping a fresh cup of coffee is more enjoyable than sitting at a desk. Not only is the tablet great for quick responses, but you actually have room to type, save drafts that will be available on any other browser, and even do voice input.

When I first received the review unit, Flash wasn’t yet available. When it became available a few days later, I downloaded it from the marketplace. I went over to the Adobe site to find some “featured” content and so make sure that it was installed. This is where the Xoom™ is supposed to beat the iPad, and I was ready to experience Flash on a tablet. The experience is just okay. Animations play at a seemingly low frame rate. On some sites the sound seemed a bit out of sync. Interactive elements on other sites were clearly not designed for a touch interface. (There is no hover/roll-over state with a touch screen.) Scrolling around the pages got very weird when Flash was present. In my opinion, having a mediocre experience is worse than having no experience with Flash. The Xoom™ has serious horsepower, so the problem is clearly with the Flash plug-in itself on touch screens devices. Perhaps this will improve over time, or perhaps more sites will convert content to HTML5 and forgo the need for Flash content.

Typing on the Xoom™ with the default keyboard is good, but not great. The virtual keys on the Xoom™ are a bit shorter than the iPad and the color scheme is a grey on dark grey. This makes it hard to see what keys you are touching through your own fingers. Auto correct is very good, and the voice input option is a welcome addition to a standard keyboard. You can get alternative keyboard applications for Android, something that isn’t an option on the iPad or other iOS devices. It is possible to thumb type while in portrait mode on the Xoom™, as it is a bit narrower than the iPad.

Taking pictures with the Xoom™ and the iPad is bizarre. It’s like holding up a lunch tray and saying cheese. With the Xoom™, the rear camera is placed in the middle of the device, so you don’t have to compensate for the lens placement like you do with the iPad rear camera. According to the specs, the pictures from the Xoom™ should be spectacular, but in practice, picture taking wasn’t particularly good. The shutter release button requires you to hold the tablet in an unnatural way, making it hard to keep the tablet still. Combine that with the Android camera software not being particularly responsive, and pictures aren’t particularly good. Video is slightly better since you don’t have to time your picture snap, just start and stop.

One thing is certain, having a built in Verizon network makes tablet computing seriously useful. Yes, your local WiFi network will be faster, but the convenience of the built-in 3G or 4G/LTE network is worth the price of admission. Verizon offers the Xoom™ for $599 with a 2-year contract, or $799 without a contract. At first I had thought that getting a WiFi tablet would make sense, and simply pair it with an existing MiFi. This way I could upgrade the MiFi as better speeds came available and the tablet, or phone or laptop would be blessed with the faster network speed. The problem with this is that now you have many batteries to charge, and the devices have different battery life. This means that the moment the MiFi runs out of juice (about 4 hours), the tablet or laptop cannot get on the network. That means that your mobile experience involves juggling battery capacity with multiple power adapters. The simple act of having one device with all-day battery life is worth the price of admission. So unless you aren’t ever going to leave your house, you will probably turn on the data plan and let it run for the life of the device, certainly longer than the 2 year contract.

Looking back on my experience with the Xoom™, I’ve had a really hard time reviewing this product. I really want to like this tablet and there is a lot of “very good” about it. I know that Android is “free” like most of the other Google products. But, the OS drives the user experience and customers don’t want to pay to be beta testers. Shame on you Google! Your partner Motorola delivered top notch hardware with amazing technology that is right on par with Apple’s iPad. Your partner Verizon brings a network that has super fast 4G speeds and amazing 3G availability. But Android 3.0 (Honeycomb) is still clearly unfinished beta software. Even the 3.1 update that was just rolled out still feels like beta software. So unless you decide to subsidize the price of the devices while you “finish” the operating system, your partners may consider competitors like RIM or Microsoft for their next tablet OS.

The decision to get the Xoom™ to market before the iPad typhoon hit required a fully baked version of Android. Motorola and Verizon did their job as expected, but Google still hasn’t brought Android 3.0 or 3.1 into a final release. Two out of three isn’t bad, unless you live in a world where the iPad exists.

If you refuse to buy Apple products, the Xoom™ is an excellent choice, and Honeycomb will get better and more tablet specific applications will arrive over time. But perhaps the smart move for the general consumer is patience. By the time Santa is ready to slide down the chimney, Google might be delivering a finished version of Honeycomb, worthy of our money. Unfortunately for Motorola, other manufacturers will benefit from your “canary in the coalmine” experience. Thanks to Moore’s Law, new products will arrive that will be cheaper and faster.

Disclaimer: I was provided a review unit of the Motorola Xoom™ by Verizon Wireless, which is scheduled for return to the carrier. I have not been compensated by Verizon Wireless other than the use of the device itself. Special thanks to Verizon for giving me plenty of time to try this product and really put it through its paces.

2 thoughts on “Xoom™ Still in Beta”