Imagine your small business has a customer that uses your product or service constantly, says nice things about your business, and generally helps spread your brand. How does your business treat these customers? 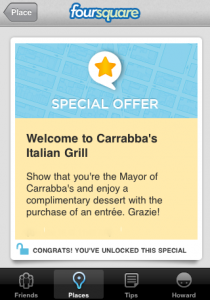 Let’s me take a few steps back. Several months ago, I showed up at my BNI business lunch, checked-in on Foursquare to find that Carrabba’s Italian Grill had a “Mayor Special,” a free dessert with the purchase of an entree. So I showed the manager my phone, he raised his eyebrow, but then asked me what I wanted for dessert. And it was delicious.

The following week, I checked in but didn’t bother to ask for the dessert. The week after that, the very nice server asked me what I wanted because she knew I had checked in on Foursquare. So that day, I got dessert. Again, delicious.

I knew that there weren’t many people checking in on Foursquare yet, the network has only recently past a million users. But I had started seeing more people check in at more locations in the area. The small group of early adopters were now being joined by some more people a little further along the curve.

At our business meetings it became a bit of a joke. Here comes Mayor Howard, ready for his dessert. Except I never asked for the dessert and never got the dessert again. I don’t need to eat dessert during the day. It was about the story, perhaps the honor of being the mayor.

Then over the next few weeks, other tech-forward members of the group in non-tech professions started to use Foursquare. They also check in at the restaurant, as well as other local businesses. The competition was on for someone to oust me as the mayor. Sometimes I specifically wouldn’t check in so that my friends might catch me.

Today, I jokingly said to the very nice server, “what’s the mayor having for dessert today?” She went completely ashen. Apparently, her boss had told her to deliver his message: No desert unless I came to the restaurant at a time other than during our weekly lunch there. She felt bad, and I started laughing. I told her that I wasn’t upset at her at all. (Her boss didn’t have the courage to deliver this message to me directly; nice to put the front-line employees in awkward situations with customers.)

But here is the crazy part. Between the four of us early adopters at our weekly business lunch, there are over a thousand people that see our status updates just on Facebook, not including the numbers on Twitter or otherwise. Our BNI group meets there every week and the bill is easily $350 each time, which accounts for close to $20,000 each year in business. (I know that my lunch dues are around $750 per year.) The cost of the one dessert, even if I was asking for it every week, is practically nothing considering the marketing and branding potential.

By checking in on Foursquare, we were doing exactly what Carrabba’s (@Carrabbas) wanted us to do: share our loyalty and eating preferences with our network of friends. And the promise that Carrabba’s made to the community on Foursquare was simple: If you check in more than anyone else, you deserve dessert.

As a small business, my goal is to have loyal fans promoting my services to their friends, reaching way beyond my own contact spheres. Here I was, a regular patron of a restaurant, sharing with my friends about the great food and experiences, no longer embraced, rather put in my place. All for a piece of chocolate cake.

So I’m done checking in at this restaurant, and I doubt I’ll take my family there or say nice things about it anymore. Someone else can be the mayor, I resign my post. In three months I got dessert twice in 12 visits, hardly abusing my status. I have plenty of other things I can share. Instead of everyone winning, we all lose. I’ll get over it, the owner/manager probably won’t care, and the very nice server who does an amazing job every week with our meeting will probably be blamed by her boss if the corporate franchise contacts the local owner about this post. (She deserves to get a bonus instead for making sure that everything runs smoothly every week.)