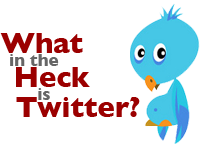 In advance of my seminar, “What in the Heck is Twitter?” on November 18th, the theme for the links this week is Twitter.

What are your best links for advice or resources about Twitter?